Prices shown are consumer prices. Prices for sub-distributors and medical professionals on request, based on volume, please send us a mail (info@prodiag.nl)!

GlutenCHECK© is intended as an aid in the detection of gluten intolerance. GlutenCHECK© as an immunochromatographic rapid test detects the presence of anti-tTG IgA antibodies in whole blood.

Gluten intolerance (Coeliac disease), known as  sprue in adults, is an autoimmune disorder of the small intestine, when the immune system attacks the body‘s own tissues. The common symptoms of gluten intolerance include bloating and diarrhea, caused by a reaction to a gluten protein found in many foods. The following symptoms could be also a sign of gluten intolerance: weight loss, malnutrition and skin disorders.

GlutenCHECK© is intended as an aid in the detection of gluten intolerance. GlutenCHECK© as an immunochromatographic rapid test detects the presence of anti-tTG IgA antibodies in whole blood. If the blood sample contains anti-tTG IgA antibodies, these will bind with the colloidal gold labelled anti-hIgA antibodies and the tTG (derived from the lysis of red blood cells in the dilution buffer). tTG will then bind the complex to the stationary protein line (test line) forming a visible, red line.

The test has also a control system with a control line. Since anti-tTG IgA-antibody levels normalizes slowly when on a strict gluten-free diet, the test should not be used to detect gluten intolerance after switching to a gluten-free diet.

Performance upon comparing with a reference method:

The test result must be confirmed by a physician with further recommendation to maintain a gluten-free diet.

Also needed, not provided in the package: 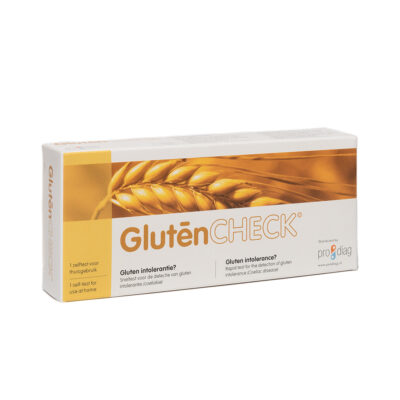