Prices shown are consumer prices. Prices for sub-distributors and medical professionals on request, please send us a mail (info@prodiag.nl)!

VagiQUICK© is a qualitative rapid diagnostic self-test for the detection of Candida antigens in vaginal secretions sampled by a swab.

VagiQUICK© is a qualitative rapid diagnostic self-test for the detection of Candida antigens in vaginal secretions sampled by a swab.

The kit is to be used by women who suffer from  vaginal symptoms like • Acute itching • Vaginal discharge, soreness, irritation • Rash on outer lips of the vagina • Genital burning that may increase during   urination

The test is based on the immunochromatographic technology. The swab sample is added to the sample pad via the cap filled with dilution buffer. From there the sample migrates into the conjugate pad, releasing  anti-Candida antibodies conjugated to blue-colored latex beads. The newly formed Candida antigen-antibodyconjugate complex moves further across the nitrocellulose membrane strip. The formed complex is captured on the support membrane by immobilized anti-Candida antibodies, producing a signal line. If Candida is present in the swab sample, there will be a biological reaction and the result will be positive. A blue line will appear in the test line region (T) on the membrane. The test includes a built-in control system realized by a control line (C). The control line confirms the correct performance of the test. To determine and interpret the results correctly, it is necessary to carefully read the instructions. All details should be understood before performing the test.

VagiQUICK© can detect Candida-concentrations starting from 6,0×103  cells/mL. The test has an accuracy of 90 %. 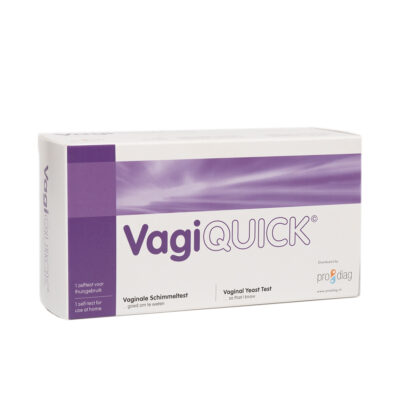